Turbo allows you to package applications and their dependencies into a lightweight, isolated virtual environment called a "container." Containerized applications can then be run on any Windows machine that has Turbo installed, no matter the underlying infrastructure. This eliminates installs, conflicts, breaks, and missing dependencies.

Turbo containers are built on top of the Turbo Virtual Machine, an application virtualization engine that provides lightweight namespace isolation of core operating system objects such as the filesystem, registry, process, networking, and threading subsystems.

Turbo dramatically simplifies and makes more reliable all phases of the software creation and deployment lifecycle:

With Turbo, developers can:

With Turbo, testers can:

With Turbo, system administrators can:

How does it work?

Turbo containers are built on top of the Turbo Virtual Machine Engine, an application virtualization engine which provides lightweight implementation of core operating system APIs, including the filesystem, registry, process, networking, and threading subsystems. Applications executing within the Turbo virtual machine interact with a virtualized filesystem, registry, network, and process environment supplied by the SVM, rather than directly with the host device operating system.

The image below illustrates how the SVM is isolated from the host environment. 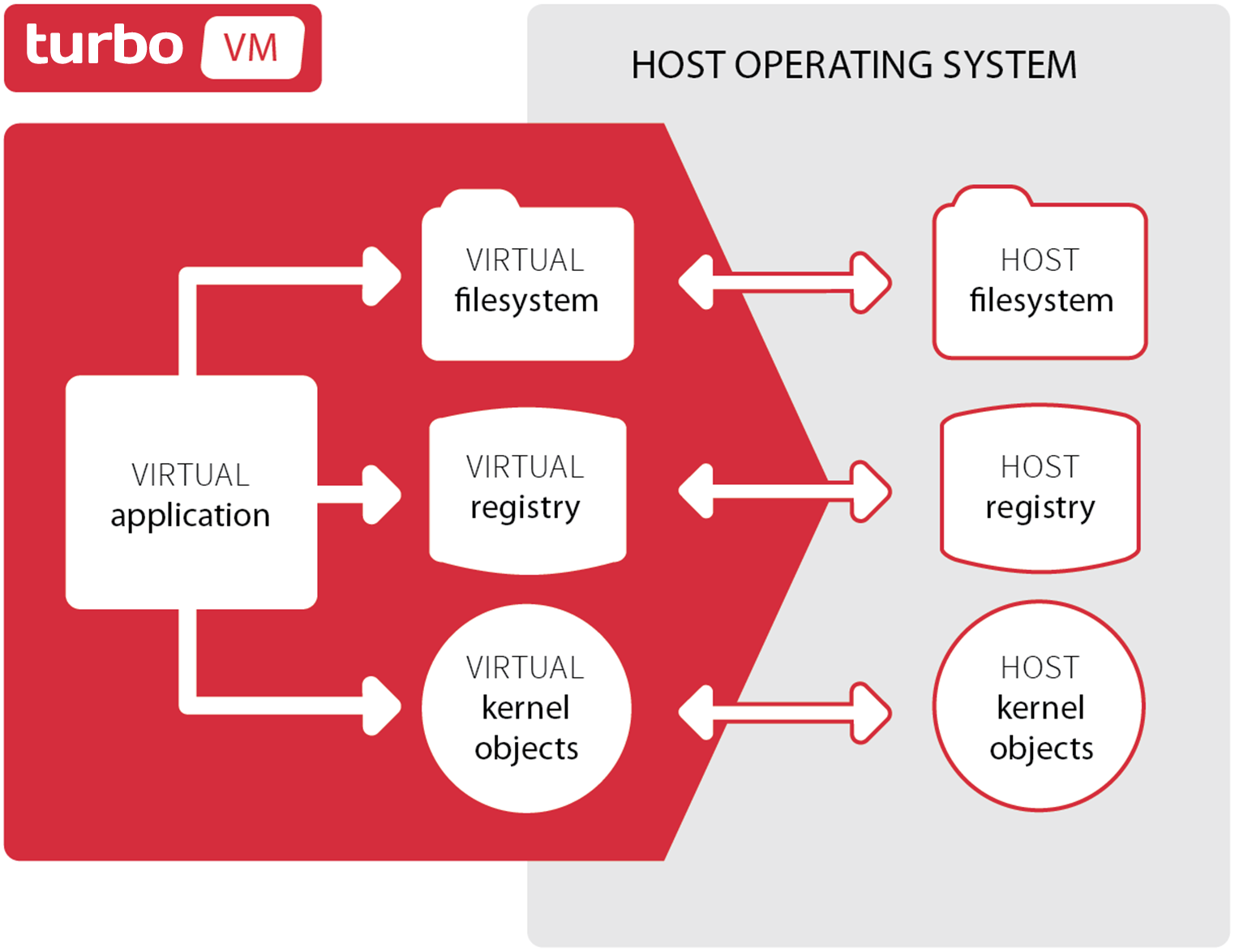 The Turbo VM is required to implement containerization on the Windows platform since the underlying OS does not provide appropriate containerization primitives. Put another way, Turbo VM plays the same role for Turbo containers as LXC does for Docker containers.

Unlike hardware virtualization systems like Microsoft Virtual PC and VMWare, or hypervisor systems such as Hyper-V, Turbo VM operates on top of the base operating on the execution stack and virtualizes specific operating system features required for application execution. This enables virtualized applications to operate efficiently, with the same performance characteristics as native executables.

There are several advantages in choosing Turbo containers over hardware virtualization systems:

No. Turbo containers use a special, lightweight application-level VM called Turbo VM. Turbo VM runs in user mode on top of a single instance of the base operating system.

How long does it take to start Turbo containers?

Turbo container startup time is very fast -- on the order of seconds or less. (Startup time excludes any time required to download images.)

What is the performance overhead of running inside a Turbo container?

Containerized applications consume only a small percentage of additional CPU and memory consumption relative to native applications. In nearly all cases, Turbo overhead is negligible.

When I run a container with multiple base images, does it link multiple containers or make a single new container?

Is there a difference between server and desktop application containers?

No, there is no special distinction. And desktop containers can contain services/servers and vice versa.

How does Turbo handle licensing?

Turbo does not modify the licensing behavior of any applications running virtualized or within a container. Running on Turbo is identical to running on a regular PC, or running on virtual hardware such as Virtual PC or VMware. And Turbo runs on a single instance of a base operating system.

Does Turbo provide a mechanism to track licenses?

Turbo Server includes a licensing module which will actively track and/or enforce licensing. For example, you can grant/deny privileges based on Active Directory or LDAP membership and define licensing constraints on a total user, total device, concurrent user, or concurrent device basis. Turbo Server also provides an analytics module that allows administrators to track application consumption and validate compliance with licensing requirements.

Where is the Turbo container hub?

The public Turbo Hub is hosted at https://hub.turbo.net/hub.

What is the Turbo.net pricing model?

Turbo.net offers Turbo Server for free for up to 5 users. Additional user seats may be purchased on a subscription basis. See Pricing for more information on Turbo.net pricing options.

What if I don't want to host my repositories hosted on Turbo.net?

Turbo is also available as an on-premises enterprise server. Please see Turbo Server for more information or to request an evaluation license.

Yes. Turbo images and containers with shell extensions or file associations can be installed onto the host operation system. Use the installi or install command with the --register-extensions flag.

**How do I pass parameters/arguments to the underlying container's cli?